He was one of the world’s most admired and successful designers of the 1990s, then Romeo Gigli lost it all. As he makes a quiet comeback in Venice, Italy’s fashion maestro tells Luke Leitch how his superstardom unravelled.

[dropcap size=small]F[/dropcap]ortunes made then lost, a calamitous love affair, worldwide fame: of all the stories that premiered at the Venice Film Festival this summer, none was more tempestuous than Romeo Gigli’s.

Gigli himself was in Venice during the festival week, but well way from the hoo-ha of starlets on speedboats and bellinis by the Lido. Now 62, he was in a side street off St Mark’s Square to launch the first shop to bear his name for years. Due to be open for a year, it will sell the new collection Gigli has designed exclusively for Joyce, a long-established chain of Chinese high fashion boutiques that bought Gigli’s very first collection in 1985.

Only a few years after that debut, Gigli seemed poised to become fashion’s great game-changer: the Armani of the 1990s. His romantic shawl-collar necklines, gentle shoulders, bandeau-swathing and cocoonish, undulating silhouettes promised to be the longed-for antidote to power suits and shoulder pads. His penchant for fitted, skinny trousers even kick-started the great leggings contagion of the early 1990s.

“The silhouette of my women was soft,”

he says. “It was round, and the skirts were shaped like tulips. At the beginning it was always flat shoes, too, only flats: I love them because they make women walk gently.” His flat-shod models pattered down the catwalk wearing the lightest of make-up and delicately unwrought chignons – the antithesis of Working Girl-esque bouffants and trowel-it-on face paint. His collections referenced medieval reliefs, Byzantine mosaics, Jimi Hendrix, Rastafarianism – and waifs.

At one particular show – his Venetian collection – the models tinkled as they walked through the Louvre thanks to the hand-hewn, coloured, antique glass sewn into the clothes. Conceptually exciting but wearable with it, he was constantly aped by the high street (the ultimate mark of influence) and developed one of fashion’s most lucrative perfume licences.

He could even count Alexander McQueen as one of his assistants: “When we looked at a jacket prototype he was working on, I found he had written ‘—- you’ in the lining!” Yet, although Gigli’s name remains as well-recognised as any designer’s, his influence suddenly dimmed. During the 1990s, instead of Gigli, it was Versace, Prada, and then Dolce & Gabbana that were left to join the table. By the turn of this century, Gigli was barely producing anything at all.

So whatever happened to Romeo Gigli?

The factors that made fashion so swoon for Gigli came thanks to a childhood that was steeped in reading and ended by the premature loss of his parents. His father, Ancora, was an antiquarian book dealer and his mother, Alfa, a contessa: “My parents taught me about art, about books. We lived in beautiful houses, and I did not go to school until I was nine.”

Looks from the new Romeo Gigli for Joyce collection 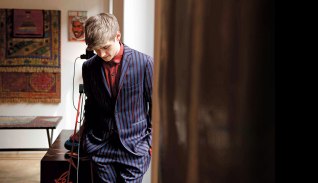 Aged 18, Gigli was orphaned. Alfa died in an accident, and, after Ancora followed a few months later, he dropped out of university and decided to travel. For the next 10 years, Gigli roamed: Asia, South America, Africa, and beyond. “For me, travelling was forgetting. There were so many new things to think about and see.” Along the way, Gigli sold off his father’s books and reinvested the proceeds in collecting “everything” that interested him, particularly costumes and fabrics. When he washed up in New York in 1977 (“Studio 54 every night – I met Bianca Jagger there”), Gigli’s radical look (“My Indian fabrics, tailored in London: small pants, floating jacket”) turned heads, and a local designer asked him to consult. The result turned heads, too – and when he returned to Italy, he was urged to try his hand at fashion. “But I am a Calvinist: severe because you can only do what you know how to do.” So for several years he studied fashion – before presenting his first, 25-piece collection in 1985. As well as Joyce, it was bought by Browns.

He is now happily married and has a 14-year-old daughter, Delitta, for whom he thinks his Joyce collection is particularly meaningful: “People at school know who her daddy is, so I am happy she can see what I do.” The new collection for Joyce contains many elements of old Gigli – a shawl, collared capelet of dusky pink silk that’s malleable and wearable, Gigli demonstrates, in a zillion different ways, and plenty of intricate reliefs plucked from his incubus-fuelled mental database. A fitted, ruched wrap dress that comes with a separate gauzy, leaf relief skirt so light and tough you can scrunch it into your bag by day, then add it to the dress when evening comes, is particularly clever.

His work with Joyce aside (the collection is set to continue and there is talk of accessories and all the rest to come, too), Gigli teaches fashion students in Milan.

“I tell them not to only concentrate on the fashion world. See everything. You have to catch what people will be looking for tomorrow.”

He adds: “Sometimes, with fashion now, if you take off the labels you cannot tell the difference between the clothes – everything is too trendy.” And does he still resent the premature termination of a career that promised so much? Gigli looks up from his cigarette: “No: never! This is my way to survive. It was the same when my parents died – I fly away. This time I fly to China!” Read more in Quintessentially Asia.