Phoebe Philo On Creative Freedom at Céline, Her “Innate Fear of Fame” and Fashion’s mediocrity 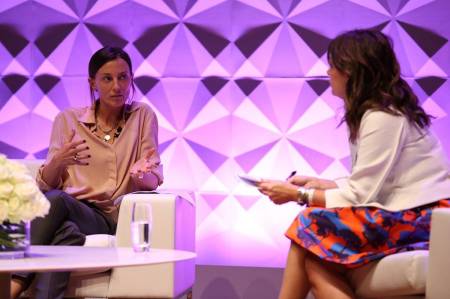 Céline’s Phoebe Philo made a rare public appearance yesterday at the British Vogue Festival here, sitting down for an onstage interview with editor Alexandra Shulman. The famously uncompromising designer didn’t make life easy for Shulman – there were very few smiles and one or two awkward moments – but then again, as Philo made clear, she isn’t comfortable with publicity. Below, the highlights of the hourlong interview, from Philo’s childhood love of “trashy” clothes to her “innate fear of fame,” and her admiration for Rick Owens’s step-team show.

On working at Chloé vs. working at Céline: “The relationships I’ve had with the two main jobs I’ve had were very different. At Chloé, it was very clear from the beginning that there was a Chloé aesthetic, and my job was to continue doing that. I took that opportunity — and it was a great opportunity — but that’s what I did. And it’s one of the reasons why I left Chloé, because it was no longer what I wanted to spend my time doing. So it was absolutely clear that when I was going to go back and do something, then it was going to be absolutely what I believed in. I couldn’t work in a way where I was doing it to a brief, to somebody else’s brief.”  Read more..