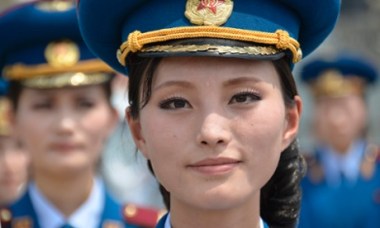 East Asia’s fashion craze for so-called ‘killer heels’ has managed to make its way onto the streets of North Korea, according to the pro-North Korean newspaper Choson Sinbo.

“The heels sold in Pyongyang No 1 Department Store and other markets have thick heels and high platforms,” the propagandist publication, published by Chongryon in Japan, reported. “The toe box is either round or square and the backs of the heels are adorned with a single strap or lace.”

“The trend changes so quickly here; it’s so hard to keep up,” Ri Mi-ok, a manager at Potonggang Shoe Factory said in an interview. “The heels are very high and stores carry a diverse selection with various decorations. Women refuse to wear heels less than five centimetres.”

“Even the men, especially the younger ones, are into shoes that have high platforms and pointy toe boxes,” Ri added. North Korea’s late leader, Kim Jong-il, famously wore shoes with a high platform heel to try and disguise his diminutive frame. Read more.