Ma Jian’s novel The Dark Road uses scorching satire to expose the agony that China’s One Child Policy has brought to parents who breach its rules. And the novelist is less than impressed by recent signs that the restrictive birth control strategy introduced by Deng Xiaoping may soon be relaxed. Summer Cao reports. 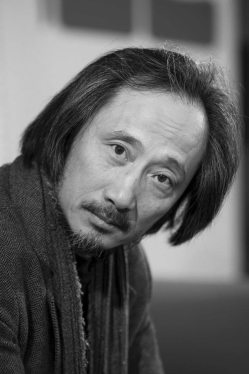 Sitting opposite me, Ma Jian has an air of the traditional Chinese intellectual with a hintofdiscreet aloofness and a pair of calm, piercing eyes. Only his slightly sunken cheeks tell of a life with many downs, and the exceptional endurance to deal with them. We are in the lobby on the 4th floor oftheKau U Fong hotel, which is spacious and elegant. It resembles a hanging pavilion, one side of which provides a viewofSheung Wan’s concrete desolation, making the comfort inside the pavilion almost a privilege. It seems the right place for an uninhibited conversation.

“My son is a good person…” he says, using the tone employed by his mother when she addressed the officials who came to confiscate their home because of Ma’s writings. It is followed by a moment of silence as he immerses himself in uncomfortable memories. Not knowing what to say, I become uncomfortably aware of the piano notes coming from the hotel sound system. In 2011, Ma’s mother was terminally ill, but he was banned from entering China. He was only granted a short visit after she died. From then on, he was truly a writer in exile. Before being barred from China, he did research for The Dark Road, a novel about maternal love, published in 2013 and translated into English earlier this year. The book tells of a massacre of infants on Chinese soil under the one child policy.The heroine, Meili, is married to the 76th generation son of Confucius, and is obliged to produce a son to continue the  family line. Having a daughter already, she has to flee her home in order to give birth again. When she is on the run with her husband and young daughter, she is forced to have a termination by family planning officers, and witnesses her aborted son being strangled to death in front of her. Her disabled second daughter is sold by her husband, after which she storms from their temporary home, only to be raped by a stranger. Falling pregnant again, she retains the baby in her belly for five years, and finally gives birth to the 77th descendant of Confucius after her first daughter goes missing.

Despite its tragedy-laden storyline, the novel’s page-turning character comes from a sense of hope and inner growth gracefully embedded within a wild literary imagination.

“The novel has two parts, with the first like a flowing river, representing the shape of a vagina, and the second the shape of womb,” Ma explains. “The novel has the structure of the female parts whose ownership all men want to fight for, just like a battlefield. Strangely enough, the Chinese government also plays an important part in this battlefield.”

Another adventurous invention is an infant spirit who strays like a ghost above a river, spying on the earth every day when the world darkens. It witnesses the murder of its human incarnation, its family’s misfortunes and its mother’s sufferings. It gives the story a unique perspective, interweaved with the unwinding narrative. It is present at the beginning of the novel when Meili is pregnant with its first incarnation, and it starts to tell the story from his recollections. The infant spirit finally comes to the earth in human incarnation at the end of the novel when the spirit’s prenatal memory ends. 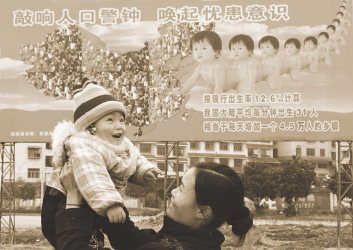 “I created [the infant spirit] order to speak out for the dead infants,” Ma says. “In the population reduction of 400,000,000 [the number who would have been born if not for the policy] proudly announced by the government, many were murdered. And just imagine how much warfare could kill 400,000,000 people. The infant spirit is there when everything happens, but unable to intervene. As a result, the tone of its narration is cold and passive, like a disembodied voice, making one feel scared.”

By making the spirit a being and giving it memory, Ma aims for mischievous revenge, shaking the atheist beliefs of the infant killers, and suggesting their deeds will be paid back by supernatural power.

Although a recent official loosening of the one child policy has hit headlines and given a feeling that the policy is no longer stringently observed, the reality is far from clear, especially in the rural areas depicted in The Dark Road. Although a novel, the book is based on real stories that Ma encountered or was told during his research. The anti-one-child-policy riot at the beginning is based on the tumult in Bobai County of Guangxi province in 2007.

The dark side of the one child policy is nothing new, but few dare speak about it, let alone feature it in a novel. This year’s Nobel Prize winner Mo Yan (his pen name literally means “don’t speak”) also published a book about the policy in 2009 called Frog, but it was written in a cautious way and won the Mao Dun Literature Prize in 2011, one of China’s highest literary awards.

“Mo has turned everything into a jeer, which lacks a lasting impact,” Ma says of Frog. “I don’t like his hyperbolic narration. I prefer a novel that possesses an inner power to one filled with a series of theatric dramas.” He uses his The Dark Road to explain: “Although I almost died with Meili, I didn’t put her death into hyperbolic words, rather I used the minimum amount of words – ‘her white toes rise above the surface like lotuses on a green lake’ – toes become white when one’s blood is drained, and the lotus is an important Buddhist symbol [it represents pureness and a person who is freed from trouble], and it also plays an important part in Chinese men’s infatuation with small-footed women [an old aesthetic requirement has it that an elegant woman should have feet as small as a lotus flower]. I think these few words work better to express my feelings as well as for the story.”

Besides excoriating the one child policy, The Dark Road weaves many infamous recent incidents into the story, such as removal of ancient towns in the Three Gorges Dam area, fake infant formula, pollution in the electronic waste village. It also  takes aim at a variety of social injustices. It is the description of such widely known incidents that has kept the book from mainland China, as with many of Ma’s other works such as The Noodle Maker, Red Dust and Beijing Coma.

Ma’s grandfather was a self-made landowner in Dezhou city, Shandong province, and his father and uncle both studied at the famous Whampoa Military Academy. Keen on bringing revolution to China, they refused to flee to Taiwan with the Kuomintang. However, they suffered abuse and lived in fear because they were labelled “descendants of the landlord class”. The family tragedy sowed the seeds of rebellion in Ma, which started to bloom when he moved to Beijing in 1979. Having received a good foundation in art and literature as a child, he joined the No Name art Yuanmingyuan poetry group.

He took a photojournalist post in a magazine published by the All China Federation of Trade Unions, and shot the first nude photo for an advertisement poster in modern China. His apartment in Beijing – No 53 Dongzhimen Alley – was a secret nest for artists, writers and poets, and fostered two Nobel-winning writers: Gao Xingjian, a writer in exile who found safe harbour in France, and Liu Xiaobo who was not allowed to collect his prize and has been incarcerated in a Chinese prison.

“Everybody gathering at my apartment was crazy, so were the policemen,” Ma says, “This was a result of repression, just like a ball – the firmer it is thrown against the ground, the higher it will bounce back.”

No 53 Dongzhimen Alley was among the first to be denounced in the Anti Spiritual Pollution Campaign in 1983, during which time Ma transformed from an artist to a writer. “The world was too sick to be rendered on canvas, so I decided to put it into words to show its real face.”

He resigned from his job and set off on a three-year journey across China, which provided material for his later work, including 2002’s Red Dust.  In 1986, he came to Hong Kong to continue his writing career, and then moved to Europe after the handover. In 2001, he collaborated in founding the Independent Chinese PEN Centre, a branch of PEN International. In 2008, he published Beijng Coma, a novel focusing on the Tiananmen massacre, which he thinks got him permanently banned from the mainland.

“A lot of people prefer to endure in silence after being punched on the face,” Ma says, “They can live after their family has been ruined. But I couldn’t – I must speak out even if there is no one with me.”

Cases of intellectuals being exiled due to political pressure have a long history, and Ma thinks his is not the worst. “Being in exile is no big deal for me, since it is really part of the traditional Chinese literary tradition,” he jokes. “Look at the poets whose work was included in the Three Hundred Tang Poems; you will find more than 90 per cent of them were in exile!”

“I became more aware of Chinese culture when I left the country in 1986,” Ma says. “I realised that traditional culture was gone and felt terrible about it. So since then, I have been brooding over how to make it recover – whether through literature, self-cultivation or bringing back traditions. This is a big challenge which I wouldn’t have taken up if I had never left the country.”

The sky has darkened, and the lobby’s warm light gives Ma’s face a tender, almost feminine glow as he jokes light-heartedly. He is hardly recognisable for what he is; a stubborn writer carrying the weight of social injustice on his shoulders. Maybe only his beloved country could make him feel again as he did when he was a 20-year-old boy dumped by his first girlfriend who left him “furious, crying, trying to be strong although heartbroken”.