A great restaurant is more than just fabulous food, it should also be a wonderful space and that rule has been applied to all three of the eateries that are making Hung Hom one of Hong Kong’s favourite destinations for fine food.

The Bloomsbury Group, who counted the author Virginia Woolf and the painter Roger Fry among their number had a simple philosophy – everything should be beautiful. Group members Vanessa and Clive Bell went so far as to reject anything from their home that could be considered ugly. To them every aspect of living, especially food and convivial conversation, was made so much better by beautiful surroundings. The group followed the great British designer William Morris who said “Have nothing in your homes that you do not know to be useful and believe to be beautiful.”

A similar principle has been applied by K.O. Dining Group who made a splashy arrival on the Hong Kong dining scene this summer. Since they opened their three restaurants on the Hung Hom sea front four months ago Francesco Greco, Hirofumi Imamura and Miki Imagawa, the three master chefs who cook in Messina Il Ristorante, Kazuo Okada and Yu Lei, have built a stellar reputation for the quality of their Sicilian, Japanese and Shanghainese cuisine.

Although the food in each restaurant is world-class and easily transcends the neighbourhood’s industrial reputation the dining trio has also been drawing crowds because of the quality of its interior decoration, which is easily on a par with anything one might find in London or New York.

With around US$15 million having been spent on the three luxurious spaces it’s no surprise they have drawn praise, nor is it any accident.

“I think if you work in a beautifully designed restaurant your motivations increase as a natural consequence,” says Greco. “Messina recalls a modern Baroque style, with bright colours and homey elements. The harbour view is the cherry on the cake. I find the restaurant an inspiring place and I think our clients feel the same way.” 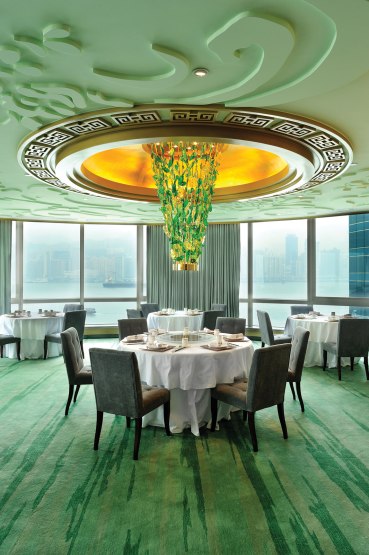 Imamura’s restaurant also has a stunning view of Victoria Harbour, but for him that was just the start of making his space an ingredient that would enhance everything he does in the kitchen.

“The design of the restaurant is very important,” he says. “It relates to the flow of cooking inside the kitchen and especially for us since we are an open kitchen restaurant and we want to create a smooth flow between the creation and serving of the food.”

The management at K.O. Dining put a great deal of thought into the three interior design concepts. At Messina, they wanted to create a sense of femininity with an open kitchen that would give a lively feeling to the guests who can enjoy watching the chefs prepare their dishes. For Kazuo Okada, their goal was to provide traditional Japanese food with an interior design based on a modern counter concept.

“The open kitchen used for Kaiseki is evidence that we provide ‘genuine’ Japanese style cuisine to our customers,” says Imamura, who did the overall design for Kazuo Okada. “Food is considered as a part of the interior design and so I wanted a harmonious balance between the two.”

For Yu Lei, K.O. wanted to change the traditional image of Chinese restaurants in Hong Kong and the eatery’s design has again been created with the goal of making female diners feel especially comfortable.

“I love using lots of Chinese flowers in Yu Lei,” says Imagawa. “They help create a feminine and comfortable space. For each of the private dining rooms, we used flowers to create a gorgeous space and build an association between dining, plants and trees.”

Imamura has worked at top restaurants in New York and Europe and he says there’s no question that the design of the three spaces has been a key factor in their success.

“The interior ambience s definitely one of the main key points for fine dining,” he says. “It’s a balance of elegant service, great food, and great interior design.”

And that’s a balance that could turn Hung Hom into a new Bloomsbury, or at least into a destination that draws food lovers from all over Asia.