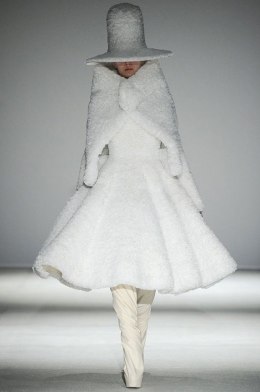 “The Tudors were the first power dressers,” designerGareth Pugh said, ahead of the launch of the In Fine Styleexhibition at Holyroodhouse in Edinburgh today. “They used clothes for a greater purpose than just clothing themselves. Clothes were worn by the monarchy then copied by the court, the merchants and middle classes – and ideas subsequently trickled down to different strands of society. This trickle-down effect can be seen today with modern fashion trends and it’s interesting to observe the same process happening 400 or 500 years ago.”

Pugh revealed that he became interested in period fashion aged 10, after being given an image of Elizabeth I wearing a ruff and voluminous dress. His spring/summer 2009 collection featured ruffled collars in a nod to the Elizabethan ruff, and the references didn’t stop there. Read more..