Omar Salam and the motherly magic of Sukeina

The Senegalese designer Omar Salam, who debuted his FW 2013 collection on February 10 2013, says he chose to call his brand Sukeina because it’s the name of his late mother – and he chose fashion over film because he felt his voice would speak more clearly through its vocabulary of shape and colour than through screenwriting, his original choice of profession.

His words came back to me as I was hiking on Hong Kong’s Peak trail on the second day of Chinese New Year. The hills were thronged with Chinese families, the spring air ringing with their conversation and greetings of Kung Hei Fat Choy.

The atmosphere was sweet and powerful, conveying a feeling of renewal and companionship. My voice is best expressed through writing but I wondered what would happen if I spoke through fashion and designed a jacket inspired by my family.

What would it look like? I imagined deep persimmon silk brocade with lapels lined in honey coloured silk and trimmed with black neoprene (yes, my family is strange and eccentric). The buttons would be strong silver clasps attached with fine silk thread that would be apt to break, reminding me that family ties are powerful but fragile and require constant work. The brocade would be slashed in places, revealing deep red silk behind, because family is also about blood and pain, as much as it is a place of safety and love.

And at the back there would be vents with a belt between them, to speak of family’s restraints and freedoms. So many things inspire contemporary fashion designers, one wonders if they chose a new muse at random by flipping open pages of an encyclopedia, but family must be the deepest source of creativity, as Omar Salam’s Sukeina has proved. What would your family jacket look like? Maybe we should have a competition to find the best ones. 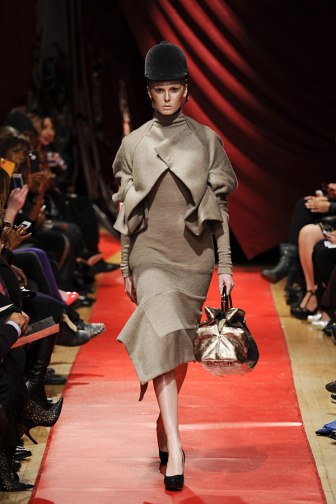