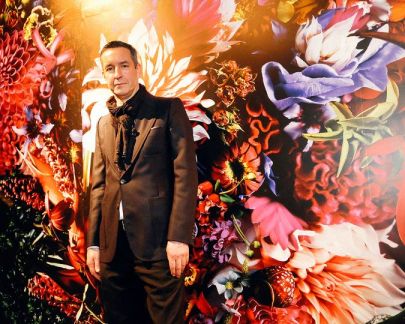 The designer Dries Van Noten at his exhibition, “Inspirations.” NYTimes

Mr. Van Noten, 55, has been designing his namesake label since 1986. He has 28 years of collections to draw upon, even more if you count those that preceded the official creation of his line. (Since the show includes a few pieces from his 1981 graduate collection at the Royal Academy of Fine Arts in Antwerp, there is good reason to.) And Mr. Van Noten is a careful archivist of his work; he estimates that the pieces he sent from his Antwerp headquarters to this show represent only 20 percent of what he has. So the amount available to be drawn upon is staggering. Read more..

Read more about  Dries Van Noten in the Spring edition of Quintessentially magazine which features an exclusive interview with the Belgian designer. Stay tuned!