The Rauschenbach family took over IWC Schaffhausen in 1880 and in 1905 one of the clan’s daughters married Carl Gustav Jung, thus making the 20th century’s second most famous psychiatrist a co-owner of the only watchmaker with its roots on the river Rhine. But as Iris Kuhn-Spogat reports, the relationship between analyst and horologist’s daughter did not always run like clockwork.

Arented four-room flat in Uster, on the shores of Zurich’s lake Greifensee houses the surgery of Dr. Rudolf Niehus, who at 71 still works every day. For him being a doctor is a vocation that has always brought him fulfillment, every since his grandfather, Carl Gustav Jung set him on the path to become a general practitioner.

Niehus has invited me to his practice to show me a unique IWC watch that was given by Jung, the illustrious psychiatrist and founder of analytic psychology, to his fiancée, Emma Rauschenbach, as an engagement present.

“She was the love of his life,” says Niehus as he opens a black jewellery case on his desk and cradles the watch, which is attached to a long gold chain. “That’s it,” he says.

The ornate gift should not have come as a surprise to Emma Rauschenbach. Her father, Johannes Rauschenbach, was the owner of IWC at the time. And yet this watch was special, something unique. Not much bigger than a one-franc coin with cushion-like sides and made entirely of gold, it looks, at first glance, like a medallion. The glass-fronted dial is completely invisible. It is hidden below a golden spring cover elaborately engraved with the letters E and R and richly decorated with tiny rubies and diamonds. At the touch of a button, the lid snaps open. Niehus looks at the IWC Portuguese on his wrist and compares the times. “Bang on,” he says. He would clearly also like to open the cover that hides the movement but can’t quite manage it. “This is the first time I’ve taken it out of the safe in donkey’s years,” he explains. “There’s a knack to it.” 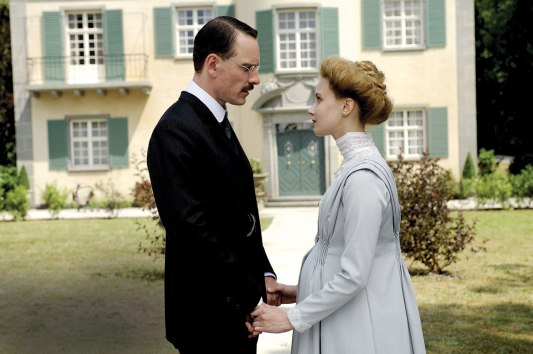 So what model is it? How much is it worth? “I don’t know,” says Rudolph Niehus, “I really know very little about this watch. My mother wore it and then so did my wife.” He suddenly rediscovers the knack and opens the back of the watch. Engraved in the gold protective cover beneath it are the words “Fräulein Emma Rauschenbach de Dr. C. G. Jung, 16. February 1903”, numbers and symbols that can be read only with a magnifying class (“300000, 18 carat, 750, JWC”) and then an engraving of two hands touching – “the symbol of their engagement,” says Niehus as he lifts the protective cover to reveal the ticking movement, laughs and says, “It’s never stopped running in over 100 years.”

Niehus is not a watch connoisseur or collector, his connection to the Jung watch is more direct and personal. He keeps it in his safe and will one day leave it to his daughter or son. Which of his two grown-up children finally inherits the watch is irrelevant. For him, only one thing matters: “It mustn’t be sold. It must stay in the family.” The watch is precious to him because of what it stands for: a love at first sight that never ended.

The story goes like this: Jung, at the time a 21-year-old medical student, was visiting friends in Schaffhausen and had been asked by his mother to remember her to the Rauschenbachs, whom she had met on a previous occasion. As Jung stood in the hallway of the Rauschenbachs’ home, he saw Emma, then 15, on the stairs – and was dumbstruck. “He later told a friend that this girl would one day be his wife,” says Niehus.

It is only thanks to Jung’s memoirs that Niehus knows of this fateful meeting, since his grandfather had never spoken to him about it. Or about what happened afterwards. Six years later, Jung returned to propose to Emma Rauschenbach. He was by now a qualified doctor with a position in a reputable Zurich clinic. The story goes that the young woman initially turned him down before accepting his proposal at the second time of asking. In 1903, at the age of 21, Emma Rauschenbach became Emma Jung. Despite her well-to-do upbringing, she had never had the benefit of a real education. She quickly made up for lost time.

She learnt mathematics, Latin and Greek and took an interest in her husband’s work from the outset. She participated in his research, allowed him to analyse her and, over the years, qualified as a psychoanalyst in her own right. Indeed, from 1930 onwards, she was no longer just the woman at Jung’s side but also a professional colleague.

“Her life was one of unbelievable richness and fulfillment,” says Aniela Jaffé who assisted Jung with his autobiography, Memories, Dreams and Reflections.

“She was able to remain true to her own inner being while remaining true to her husband and to her profound understanding for his life’s work.”

Jung often wrote and thought about time, although not in any practical sense. There is no record of him picking up tools in the Schaffhausen factory, but the master horologists of IWC might appreciate some of Jung’s ideas, such as the notion that the unconscious is a place where timekeeping is especially difficult. “The unconscious has no time,” he wrote in Memories, Dreams and Reflections. “There is no trouble about time in the unconscious. Part of our psyche is not in time and not in space. They are only an illusion, time and space, and so in a certain part of our psyche time does not exist at all.”

Jung also used a watchmaker’s metaphor in Memories, Dreams and Reflections, claiming that, “The pendulum of the mind oscillates between sense and nonsense, not between right and wrong.” 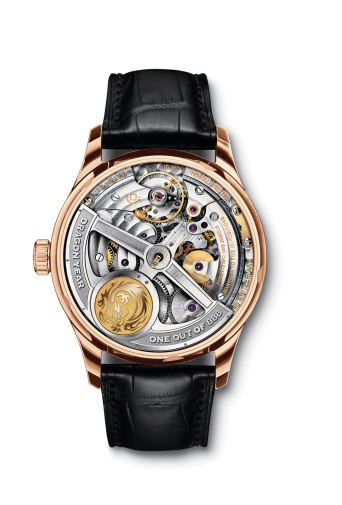 JUNG DRAGON: Engraved on the gold medallion is the dragon – in Chinese culture a symbol of good fortune, prosperity and strength of character

Emma Jung may have begged to differ, at least about the right and wrong part. Jung called marriage a “crucible of consciousness” in which the characters of the partners are transformed forever and he certainly tried hard to prove his own theory. Despite all their good fortune – the Jungs, co-owners of IWC from 1905 onwards, were financially well off – there was one major blight on Emma Jung’s happiness: her husband’s infidelity.

Shortly after the birth of their fifth child, C. G. Jung embarked on a relationship with a young patient, Antonia “Toni” Wolff, which was to continue for almost 40 years and forced Emma Jung into a ménage à trois.  The relationship between Jung and Emma was explored at length in this year’s box office hit A Dangerous Method, in which Michael Fassbender played the psychiatrist and Sarah Gadon his wife.

Instead of leaving her husband, the woman Jung spoke of as “the foundation of my house” remained at his side. Instead of breaking down, she mustered her outstanding intelligence to bring a female approach to the often sexist work of the pioneers of psychoanalysis, such as Sigmund Freud. She left a record of her insights in Animus and Anima, the only book she ever wrote.

All that was a long time ago. Emma Jung died in 1955 and C. G. Jung in 1961. But despite that, Rudolf Niehus has vivid memories of his grandparents. “My grandmother was a very elegant lady: very reserved, very shy and always beautifully coiffured,” says Niehus, “and when we were ill, she would come and see us.” His relationship to his grandfather was also restrained rather than intimate. Niehus remembers C. G. Jung as the head of the family, a man who was intellectually superior to everyone around him. Not a grandfather who told stories or played games but a grandfather to admire – and to be slightly afraid of. “When we visited, we simply did what he told us,” says Niehus, “everyone always did what he told them.”

Although this could be a burden, it was sometimes also a blessing, as Niehus explains. “It was my grandfather who said I should study medicine.” Niehus, the son of an architect, hesitated, wavering between architecture and medicine. He explains why he finally chose to be a doctor as follows: “After doing my military training, I was invited by a friend of my grandfather to attend a dream analysis session.

There were three dreams,” says Niehus. In the first, he was following his grandfather, who was holding a candle in his hand, up the stairs to his grandfather’s study. In the second, his grandfather handed him a golden casket, and in the third, he was fishing in front of his grandfather’s house where he landed an immense carp from the waters of Lake Zurich. The professor’s interpretation: “If I follow my grandfather, the light, I find my way to myself, symbolized by the giant carp.” The young Niehus enrolled to study medicine in Basel, as his grandfather had done before him. It is a decision he has never regretted: quite the opposite, in fact.

JUNG DRAGON
Carl G. Jung kept a private chronicle for 16 years that until recently had scarcely been seen by anyone outside the extended family of his descendants. It’s an elaborately designed scripture, filled with his fantasies and surreal imaginings, known as The Red Book.

Jung, who by the time he began work on the chronicle had already broken with Freud, wrote out his thoughts using a runic Latin and German calligraphy to develop his mythically suffused conception of the human psyche. The book’s accounts of Jung’s visions, fantasies and dreams are also punctuated with his paintings, one of which shows a dragon that resembles a centipede, its jaws opened to swallow a yellow ball. Jung’s inauspicious explanation of his image: “The dragon wants to eat the sun, and the youth beseeches him not to. But he eats it nevertheless.”

Scroll forward five decades and IWC has its own take on the dragon, in a special edition of the Portuguese Automatic, designed to celebrate the current lunar year, which belongs to the water dragon. The watches high-precision movement can be seen through the sapphire-glass back. Engraved on the gold medallion is the dragon – in Chinese culture a symbol of good fortune, prosperity and strength of character. After spending 25 years locked away in a Zurich bank vault The Red Book was published by W.W. Norton & Co. on October 7, 2009.