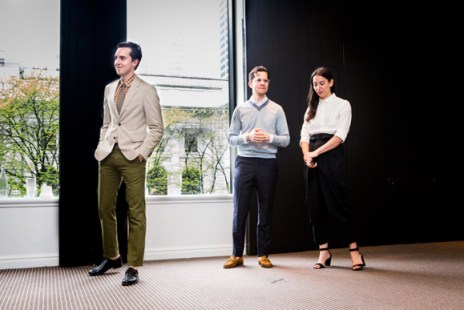 Most new fashion companies, like startups in any field, are destined to fail. On Friday, ten young designers, at the invitation of the Council of Fashion Designers of America, pitched their companies to a panel of four prominent investors in a hotel across from Bryant Park, seeking lessons on how to avoid that fate.

A cobbler named Isa Tapia, who wanted capital to help keep up with demand for her pretty shoes, said, “I’ve lost some orders because I’ve had to say no to stores.” Kaelen Haworth, a clothing designer, said, “We want to implement what we’re calling a double-double strategy—to double doors and sales for each year going forward.” (“Doors” refers to the stores where the collection, called Kaelen, is sold.) Others had more swagger. Some designers projected that their sales would increase tenfold in the next five years; others predicted twentyfold growth. “I had an order from Barneys before I even knew I wanted to be a designer,” Yara Flinn, the proprietor of a five-year-old women’s line called Nomia, claimed in her presentation.

The panel of judges sometimes seemed as though they belonged on an episode of “American Idol,” which was surely part of the plan. “If I could bottle that!” Lawrence Lenihan, a venture capitalist, said after Flinn’s performance. But they also had some questions: What’s your e-commerce strategy? Who are your competitors? “Is there not a scalable way to tell the customer your story?” Lenihan asked a jewelry designer who travels across the country to make personal appearances at the stores that carry her line. “Otherwise, you’re going to be living out of a bag for the next five years.”… Read more